At the end of the summer, there are many village festivals and parties in the area. Such a "Festa da Aldeia" was held at Espiche recently.

These are mainly rather "macho" affairs, with the local male population vying in various sporting? activities over a weekend. As well as competitions of 5-a-side football, target shooting and bowls (petanque), there are such sundries as 'climb the greasy pole', 'catch the pig', sack races and tug-o-war. They are usually held at "Portuguese" time, which can be up to two hours later than the publicised time. On the other hand you may arrive late and find that you've missed it!

The Saturday night ends with a meal or snacks (petiscos), followed by the "Baile" or dance, with live music.

Usually a local folkdance troupe also entertains during the musicians' interval, thus keeping alive the traditional dances and showing that the group are not only expected to perform for the tourists.

On the Sunday there are parades and church services, and the children have their sports day, with all the usual races. The afternoon sees all the remaining competitions finished off, and then the Grand Prize Giving.

Throughout the weekend a tombola is run, either in support of the local church or the village sports club. The tickets for this must take hours to prepare, for each consists of a tightly rolled and bent small square of paper. If you are a lucky winner, your ticket will have an official stamp on it, and the number of the prize. The prizes are not exactly of great value, but you could come away with something of use like a tea-towel, ash-tray, baby lotion or even a bottle of wine or spirits!

P.S. Sorry about some of the pictures, but these occasions only happen once a year, and it was a damp overcast Saturday. Added to the problems, the battery was very low on the camera (especially at the Baile!) due to having no electricity all day........... 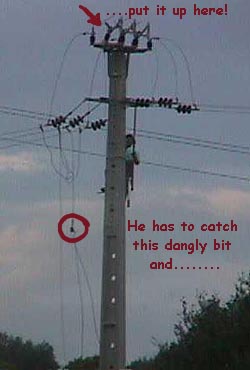