Places in the South West Algarve

A village on the main EN 125, with roads that lead south to Praia da Luz, and north to Bar„o de S„o Jo„o. Going into the village, rather than by-passing it on the main road, you will find several restaurants and bars.
More active than Alm·dena, in the sense of the community, the 'Espichense' have their own church, their own sports club and hold village parties and dances.
Vale Grifo and Tiffany's Riding Centre are only two kilometres away, to the west!
For accommodation for 4 to 5 people try Horta da Avozinha, just north of Espiche,
or Bed and Breakfast is available at Belo Horizonte, the Guest House next door to Tiffany's.

Some pictures of Espiche 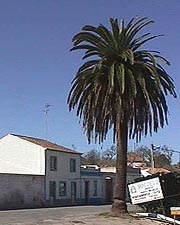 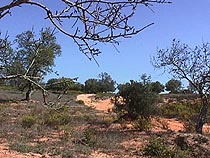 Palmtree on the old main road (1999) A Well, with  a  Nora Countryside to the North

A small, but rapidly expanding, village that now boasts three restaurants (O Celeiro, O PoÁo and O Convivio) and several bars. There is also a small market for farmers' produce and two small 'Mini-mercado's.
A Community Centre is under construction (2006)

There's not much more of note about it, but Vale Grifo and Tiffany's Riding Centre are only a kilometre away to the east!